We’re all looking for that perfect getaway.

Trapped in a never-ending cycle of work, eat, sleep and repeat we dream about escaping the rat-race and fleeing to some far off, exotic hideaway where we can spend our days and nights catching up on all of those moments that we lost because we were too busy to notice that they’d fallen by the wayside.

The author Chuck Palahniuk said, “You are not your job” and even though we all know he was right, it’s all too easy to get lost in the midst of the working world and forget that we were born to do more than work.

Even though we fantasize about fleeing the confines of the lives that we’ve made for ourselves, we all know that in reality, that’s just another fiction that we’ve made up to amuse ourselves.

But there is a way we can find some solace and respite from our toils, and that the freedom we so desperately desire lies in the warm, relaxing waters and safety of a hot tub.

Pampered by bubbles of air while luxuriating at your ease in the embrace of a hot tub is a little slice of paradise that offers us all a to chance to pause and hit the reset button whenever we submerge ourselves in their calming caress.

But choosing the right hot tub to spend those precious moments in, that’s easier said than done, which is why we decided to get up close and personal with one of America’s favorite hot tubs, the PureSpa from Intex, in order to find out what’s good and what’s bad about it, and whether or not it’s worthy of its longstanding reputation.

An old aunt of ours used to take great delight in telling us “Pearls before swine”, as she always used to maintain that whatever was good about someone, or something, should always be given precedence.

So, with that in mind, let’s find out what the PureSpa has going for it.

Whenever we’re asked the question, “What’s in a name?”, our very first thought is “Everything, because, without a name, you’re nothing” and Intex has spent half a century building its name and brand and establishing itself as a force to be reckoned with in the world of hot tubs and the devices and wares that we invest our free time in.

But don’t just take our word for it, dig a little deeper and do some research, and you’ll almost certainly come to the same conclusion that almost everybody else has. What’s in a name? As far as Intex is concerned, their name is everything.

Like most inflatable hot tubs, the PureSpa is ridiculously easy to set up. It’ll arrive at your home with almost everything that you’ll need to start using your tub.

Lay it out, plug the pump into the wall, attach the air hose to the tub, press the button and it’ll start to inflate.

Once it reaches the optimal pressure that you’ve set, it’ll switch itself off and that’s when the human factor comes into play.

Remember we said that the PureSpa comes with almost everything that you’ll need to set it up? What it doesn’t come with is water, so you’re going to need to grab your hosepipe and fill the spa with water. And when you’ve finished doing that?

Your part in the PureSpa’s set up is done and dusted and it’s ready to take over and do its thing. It really is that easy.

And when you’re finished relaxing in the tub? Just pull the drain plug, let the water out, deflate it and store it until you’re ready to use it again.  It’s even easier to take down than it is to set up.

The PureSpa is a seven-foot behemoth that when full holds close to two hundred and ten gallons of water and weighs more than a small moon.

Make sure you’ve positioned it where you want it to be because when it’s full of water, there’s no way that anyone is going to move it.  Intex says that the PureSpa will comfortably allow up to six adults to relax in style and having spent more than our fair share of time enjoying a few quiet hours in the PureSpa, we can confirm that what Intex says is true.

It’s a family-friendly hot tub that you and your brood will all be able to enjoy, either at the same time or independently.

It’s All About Control

Everything that the PureSpa does, from setting and maintaining the temperature of the tub to controlling the pressure of it’s one hundred and seventy high-pressure bubble jets is controlled by one single unit.

It’s a push-button, easy to use system that’ll let you adjust, and perfect the settings of your tub so you can sit back, relax and enjoy everything that the PureSpa has to offer, in the way you want to, at the touch of a button.

If everything else in life was as straightforward as the PureSpa, the world would be a much better place.

It Doesn’t Have To Be Hard

It’s the little things that make all the difference, and while it isn’t a deal-breaker or a deal maker, the PureSpa has a built-in hard water treatment system that may not, on paper at least, seem like much, but might just put a little extra bounce on your step if you intend to spend a long time in the tub.

While we’re far from being experts on such matters, we’ve been assured that long term exposure, and by long term we mean the weekends that you’ll spend in your tub, to softer water is better, and beneficial, for your skin.

So, technically, and from a certain point of view, the PureSpa is a beauty salon as well as a hot tub.

If you’re worried about durability and the PureSpa’s ability to survive the cataclysmic destruction that the younger members of your family and their friends will wantonly meter out to your hot tub, don’t be.

Made from three-ply puncture-resistant PVC and rubber, the PureSpa can take whatever your kids will throw at it and keep on ticking and maintaining the warmth and pressure of the tub.

We used to think that the only thing that would survive the bomb being dropped was the cockroach, but now we’re pretty sure that the PureSpa would emerge unscathed too.

You don’t have to worry about uninvited guests taking a turn in your hot tub either, as when you vacate it, you can lock it up tight with the cover that it comes with.

The bugs can’t get in so you’ll neer have to worry about being surprised by an eight-legged arachnid taking an evening dip and refusing to get out when you want to get in.

The Price Is Right

Like all inflatable hot tubs, the PureSpa is reassuringly affordable and won’t leave a lasting impression on your pocketbook.

When Intex said that they design everything they make with value in mind, they meant it. And they knocked it out of the park with the PureSpa.

Wait a minute and hold the phone, because it’s not all good news. The Intex has a number of issues that might provide you with some much need food for thought.

By now, you’ve already got a good idea of how big the PureSpa is. As we mentioned earlier, it’s big. It’s really, really big.

While that won’t be an issue for most people and those of you with families, it might be a problem if you don’t have the yard or porch space to accommodate it.

And when it’s full of water, it isn’t exactly light. The size and weight issues that make the PureSpa so appealing to so many, don’t do it any favors with others.

And Then There’s The Cost

In order to maintain the temperature of the water, you’re going to have to let the PureSpa’s pump run twenty-four hours a day, seven days a week and the cost of that is going to gradually mount up over time.

Don’t say you weren’t warned when your utility bills come in, as the PureSpa will suck up power and like Oliver Twist, it’ll keep on asking for more.

Customer Service Is A Problem

While we haven’t had a problem with our tub, the reviews from the people who have, are scathing. They’re not mad at the tub or about things not being one hundred percent right with it, because they understand that these things happen and that’s just the luck of the draw.

What they’re mad about is the customer service they received when they tried to use their warranty to make sure that they got what they paid for, a fully functioning hot tub.

Let’s just say, that the warranty isn’t as rock-solid as you hope it will be and that Intex’s customer service department either needs some additional training or a crash course in empathy.

With our hands on our hearts, we have to admit that we’re fans of the PureSpa and have spent many a lazy evening soaking in ours while staring up at, and counting, the stars.

But after taking a slightly longer, and far more in-depth look at this tub, we’re forced to admit that it does a few issues that are slightly problematic.

That said, what Intex got right with it far outweighs what they got, and continues to get, wrong.

That means that we’re forced to happily concede that the PureSpa thoroughly deserves it’s rock-solid, and well-earned reputation as one of America’s favorite hit tubs.

Reacy to check out the price? Click the button below to see more details. How Long Can You Stay In A Hot Tub Safely?

We all have those days where the only thought getting us through the day is of our amazing hot tub at home, calling our names with plenty of bubbles, all the jets on, and a nice glass of wine. When the day has pushed you to your limits, it might be tempting to get into… Looking to try something different? Just like the name suggests, the Intex Hot Tub is an inflatable hot tub that has it all. It’s an innovative idea, and perfect for families and friends to enjoy a relaxing spa at parties and get togethers. If you like the sound of it, you’re in the right place…. 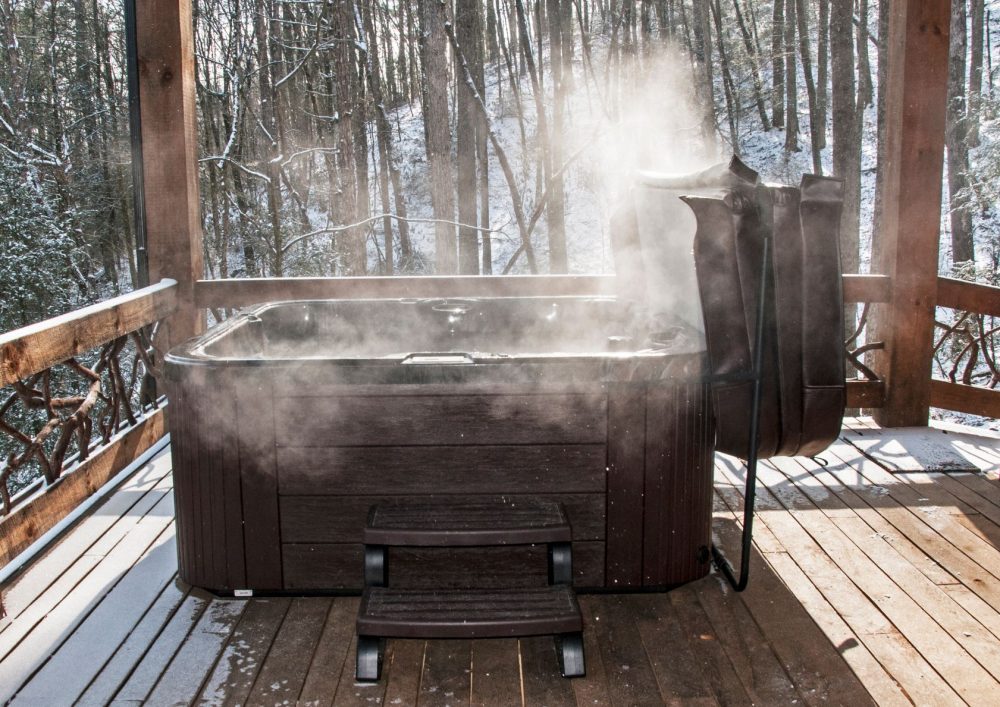 Here is a quick guide to give you information on choosing the best inflatable hot tub in colder climates.