Oh, that sound? I’m in the hot tub reading a novel – Jane Smiley

After a hard day at the office and on the factory floor, our thoughts inevitably turn toward how we’re going to spend the evening relaxing.

And when the working week is finally done, and the weekend finally welcomes us with open arms, we want to make the most of every possible moment that we can. That’s why an increasing number of people, searching for a way to wash away the stress of their nine to five lives, are installing hot tubs in their yards and porches.

So that they can get home, get changed, jump in the tub and feel the day just melt away, regardless of the season. It doesn’t matter if it’s Summer, Spring or Fall, when the hot tub is on and the water is fine, you can just climb right in and let the rest of the world fade into the background.

Right about now, you’re probably thinking about how good having your own hot tub sounds, but are desperately running through a list of mental calculations that balance the cost of having one installed and how good it would feel to while away the hours being massaged by water jets in the comfortable embrace of a hot tub.

We know, we’ve been there, but what if we told you that there was a way that you could enjoy all of the benefits of a hot tub without having to face the hassle of the installation process and all of the financial, time-consuming headaches that come with it?

Sounds too good to be true, doesn’t it? Well, it isn’t.

You don’t have to have an old-fashioned, permanent hot tub anymore when the semi-permanent, inflatable models are every bit as good as the tubs that preceded them. 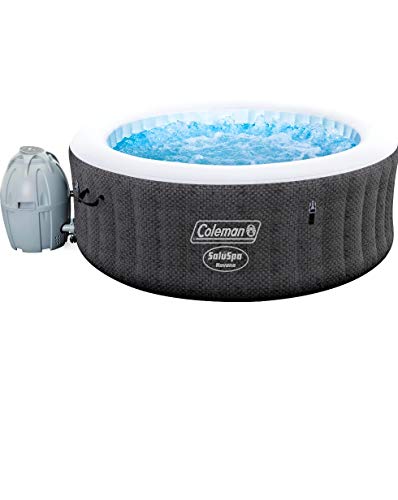 That’s a lot of questions, and the answer is the same for all of them.

Yes, that Coleman, and yes they also make hot tubs. In fact, they’re so good at making inflatable hot tubs that they’re consistently in the list of best-selling tubs and one of their most popular fill-your-days with pleasure and relaxation models is the Saluspa, or as it used to be known, the Lay-Z.

While we’re more than familiar with this tub we have no idea why Coleman rebranded it, but for all intents and purposes, it’s still the same inflatable hot tub, it just has a new name.

What You Need To Know

It’s a family-sized hot tub that will comfortably hold four adults, but at a push can accommodate six. So, your friends and family can join you in the tub and soak their way to relaxation heaven at the same time as you do.

Or they can if you feel like sharing,  but if you don’t, that’s between you and your loved ones.

Fully inflated, the Lay-Z (yeah, we have trouble remembering that it’s now called the Saluspa too), measures six and foot wide by almost two and a half foot high, which means it’s a fairly substantial tub that takes up quite a chunk of real estate.

But it’s high enough to let you slip into its warming caress without worrying that you’ll slip below the surface or be visible to prying eyes and unwanted attention.

It’ll also hold somewhere in the region of nine hundred liters of water when full, and depending on how many of you are enjoying everything that the Lay-Z has to offer, weigh around two thousand pounds. While that sounds like it’s pretty heavy, in the world of hot tubs, that’s next to nothing.

The more traditional, wooden, plastic, and fiberglass hot tubs that became all the rage thanks to their starring roles in more movies and television shows than we care to remember weigh close to that much before the first drop of water even hits them.

Best of all though? When you’re finished, for whatever reason, using the Lay-Z, you can just let the air out and store it until you need, or want, to use it again.

So How Does It Work?

The Lay-Z comes with an all-purpose pump that inflates it, warms the water to your desired temperature, maintains the heat, and controls the filtration, of the water in the hot tub and the pressure, and flow, of the AirJets. It also has a remote, so you don’t even have to get out of the tub to change the settings.

What About The Water?

While the Saluspa (we remembered and got it right!) cleans, heats, and keeps the water in it warm, you’re going to need to break out your hose and add the water yourself.

And when you want to let the water out? You just pull the drain plug and let it flow away.

How Hot Does It Get?

It’ll never get too hot, as the pump makes sure that the temperature reaches a maximum of around one hundred and four degrees Fahrenheit or forty degrees celsius.

That’s more than hot enough for anyone, and we’re willing to bet that you’ll be comfortable at around a couple of degrees or so below the top temperature it’s capable of generating, but whatever your desired heat, the Saluspa will easily maintain it.

Personally, we like it around thirty-five or thirty-six and it easily holds that temperature for as long as we need it too.

That said, it does take the pump around twenty-four hours or so to get the tub up to temperature, so for that first day, you’re going to need to be patient and let it do what it does to get your tub ready. Like all of the best things in life, it’s worth waiting for.

It’s All About The Bubbles

And when we say every inch, we mean each and every single inch that’s resting below the waterline. The Saluspa has sixty jets that you can control, alter the intensity of and increase or decrease the pressure of at the touch of a button.

You’re going to be tempted to crank the AirJets up as high as they’ll go when you first get in, we were too,  and while it feels great, when they’re turned all the way up they’re loud and tend to drown any conversation in a constant wall of volume.

While it’ll take a while to find your perfect massage setting and a sound level that you’re happy with, don’t give up and stick with it. It’s worth it and every part of your body will be glad that you did.

No, it most definitely will not burst, pop, deflate, or be derailed by a puncture.

The Saluspa is made from durable, puncture-resistant (although it does come with a puncture repair kit because life has taught Coleman that you should never say never) Tritech material (which in layman’s terms means it’s built using multiple layers of tougher than tough rubber and plastic) that’s UV resistant and able to easily stand up to, and deal with, all sorts of chicanery and tomfoolery.

If you’ve got a couple of teenagers in your household, you’ll know what we mean and if the Saluspa can cope with our kids, which it has so far, it can handle just about any abuse and punishment that anyone’s children will subject it too.

What About Bugs? Won’t Bugs Swim In It When It’s Not Being Used?

We were worried about the same thing, as to be honest we’ve got a thing about spiders and just the thought of their eight legs thrashing around in our hot tub was enough to put us off wanting to go in it.

But we needn’t have worried, as it comes with an easy to fasten and remove cover which you can attach when you’re not using it and is guaranteed to keep the Saluspa bug free.

Our tub has been up all Summer long, and because we’ve been using the cover, we haven’t seen a single insect use it to kick back and relax since we set it up. Not one single spider. It’s a bug-free zone.

How Comfortable Is It?

Here’s the best bit, and the main reason why we’re so sold on the Saluspa. Even though it doesn’t have any purpose made seating and you’re going to have to park your rear on the bottom of the tub, it’s literally like sitting on a bed of air.

It’s so comfortable, you’ll forget where you are, and between the heat, the bubbles, the water, and feeling like you’re floating, you’ll lose hours of your life to the Saluspa and you won’t regret a moment of them. If there’s a better way to spend your downtime, we haven’t found it yet.

The Benefits Of Inflation

Why choose an inflatable hot tub instead of having a traditional one installed? Well, first and foremost, it’s all about cost. Inflatable hot tubs are an affordable way to pamper yourself and get a taste of the movie-star lifestyle without having to fork out movie star money.

Inflatable hot tubs provide all of the comfort and pleasure that their traditional brethren do, and when you’re finished using your tub, you can just drain it and store it until you want to use it again.

They’ve got all of the benefits and none of the drawbacks that normal hot tubs have, and are plagued by, and succumb to.

And the, formerly known as the Lay-Z, Coleman Saluspa? It’s right up there with the best of them. What Is The Best 4 Person Inflatable Hot Tub? What Is The Best Inflatable Hot Tub for 2 People? What Are the Best Showerheads You Can Buy- Reviews, Ratings, Prices?

Read our guide for a list of the best shower heads and learn why they are superior to cheaper models. Find out how easy